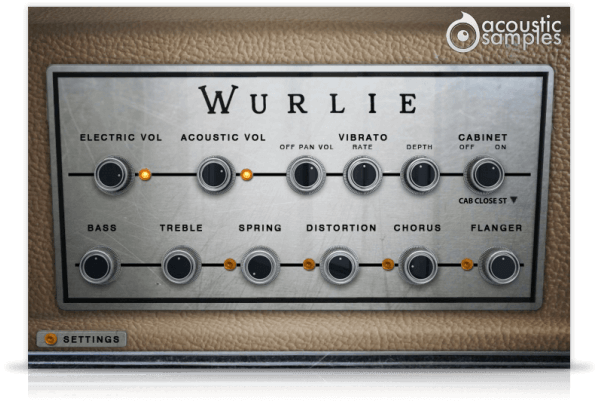 Wurlie is based on e a Wurlitzer© 206A model. The Wurlitzer© 206A is a student model, and is very similar to a 200A except for its beige color and built in amp/speaker (it also did not come with a tremolo). It was designed to be paired with a 206, which is the teacher model and they were mainly used in conservatories. The teacher had a headphone and microphone to be able to listen to each student individually and talk to them without others hearing them.

Once equipped with a DI output and a tremolo system (this is a very common and easy mod with just a few components to solder on the preexisting holes in the original circuit board) the 206A sounds exactactly like a 200A with the exception that it also has a built in amp that is more powerfull and has more bass than the two small front speakers of the 200A's.

Here are a few pictures of the model we sampled

Authentic reed sound
We recorded the Wurlie from both the direct output using a state of the art DI (Universal Audio Solo 610) and also using a pair of microphones right above the keys next to where the head of a player would be.
With our precise resonance model, our detailed staccato and release adjustments and the meticulous velocity layer transitions, the Wurlie is truly the most detailed and accurate recreation of the famous reeds electric piano sound.
more...
In the default panel, you have access to many features including the mix of the Acoustic and Electric volumes.
The Acoustic volume, if you don't need it, can be loaded/unloaded on the fly by clicking on the yellow led.
With the right Acoustic / Electric volume adjustment, you can easily transition from a live sound or to a more inimist sound of you just playing at home with the warmth of the key clicks and sound.

The student models don't have the vibrato circuit built in by default, but with a whole system of teacher / student com system designed for quiet music courses instead.

There is a common mod for these instruments that consists of adding the vibrato circuit and even add the possibility to control its depth and rate. We added these possibilities and went a step further and added the stereo pan present in Rhodes suitcase instruments.

Just like for every mechanical instrument, there are resonances, but in the case of the Wurlie, they are very specific.

We captured the sympathetic resonances for both pedal up and pedal down and modelled them carefully to make sure you get the most natural response.

All the FX you need

Wurlitzers© are often played with FX, we added a 2 band EQ, a Spring reverb, a tube distortion, a chorus and a flanger, and there is also a list of known amp simulations to choose from.

That's pretty much everything you need to mimic the sound of any Wurlie in any song. 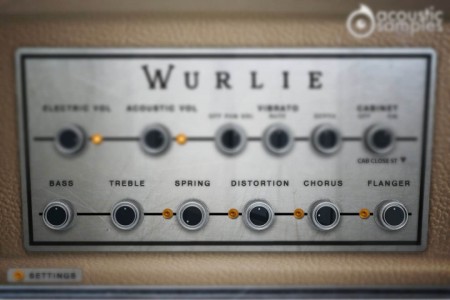 more...
You can turn on or off the amp simulation, based on a the real amp of the Wurlitzer© (at three different distances), we also added a few other amp simulations like a Mesa Boogie, a fender 210, and a Gibson. You also have the choice to load them in stereo or in mono.
The FX section contains:
- A 2 band EQ with Bass and Treble controls.
- We used an IR of a spring reverb to mimic the most used reverb on this kind of instrument.
- A tube Distortion
- An analog Chorus
- An analog Flanger

The advenced panel lets you control a few things like the pedal noise or the release volume, and also a few more parameters of the FX.

There is also a complete section about the MIDI controls to tweak the response of the Wurlie and match it exactly to how you like it.

more...
In this panel, you can change some parameters more in depth as well as control the response of the library to your keyboard:

Technical description
1.21Gb uncompressed, 278Mb compressed in lossless flac format, around 3123 samples.
10 Velocity layers for the sustain.
20 Velocities for the release.
Time based release samples for accurate staccato sound.
Sustain pedal noises (up and down), triggered automatically.
Independant mix of the acoustic/electric sound.
Sympathetic resonance on both pedal up and down.
Complete control over the midi response.
EQ.
Vibrato simulation.
Saturation, chorus and flanger effects.
Amp simulation of the real cabinet.
Spring Reverb.
Advanced UVI scripting giving you access to a simple yet powerful interface and advanced features.
iLok or computer based

By Dawou Makwunu
Have your Wurlie for 2 years now and i'm still lovin it. It sings, i'm really diggin this sound. Last week i purchased my first real Wurlitzer 200a and it will be voiced to match the sound of your wurlie. If you one wanna sell the 206 model you used for makin your awesome plugin let me know :) Keep up the good work. Blessings, Marc

By SoundAndGear
I know what you’re thinking…”another wurli ep library?” but don’t! First..I LOVE a good EP library, and second, this is based on the 206a “student model”, not the 200a like we see most of the time. This one had it’s own built in amp/speaker. But anyway, this library is dedicated to capturing the sound of that specific instrument in true Acousticsamples fashion... Read more: http://soundsandgear.com/big-fish-audio-acousticsamples-wurlie-review/

20 character minimum. Focus on the product and your experience using it.

Paste the URL of your video on YouTube or Vimeo

Enter the code in the box below: